Aalto University and TongJi University in Shanghai are in the process of materialising their collaborative partnership in education discussions for which started few years ago. I’ve been one of the lucky professors who were given the duty to run a pilot course in TongJi. The main aim of these pilot courses are to familiarise ourselves with the working culture, facilities and students of TongJi and to identify logistical as well as pedagogical requirements together with TongJi staff we need to take into consideration when further developing the curriculum. In line with this aim, I went to Shanghai on March 4th and came back yesterday, on March 18th. I delivered a masters course entitled Creative Sustainability: Socio-technical Transitions to Sustainability. Before my departure, I was on one hand very excited with the prospect but on the other hand very nervous as I felt like I was facing several unknowns that I needed to manage: First, I had no idea about the school’s facilities, in what kind of a room I’d be teaching and weather it’d be suitable for the purposes of the course. Second, although I always had a couple of Chinese students in all my classes in New Zealand, having a class full of Chinese students was new for me and I was worried whether I’d be able to understand and work in accordance with the cultural differences between me and the students to give them a good learning experience. Third, due to logistical difficulties I wouldn’t be able to invite any of my Aalto colleagues as guest lecturers and decided to try to invite colleagues from TongJi but I practically knew no one except from an Italian colleague who had been working there for several years. I invited her for a guest lecture but she couldn’t commit until very close to my departure date as she her teaching schedule was not ready. Fourth, I was going to teach theories which were essentially about radical, structural changes that had predominantly been developed in Europe and therefore are based on certain cultural assumptions that are not yet tested in Chinese context. So, I wasn’t sure how the students would react to what I was about to teach them. Fifth, as I have little understanding of Chinese culture I was worried to somehow make a big mistake that would strain Aalto-TongJi relationships. Upon reflection, now I know that all I needed was actually to prepare my lectures (which I did) and not worry about the rest (which I didn’t).

Muumi and Sauna and the Funkiest Elevator in the World

My class was to be held at the Sino-Finnish Centre, which was outside of the main university campus, ten to fifteen minutes from my hotel. At the airport in Helsinki I bought a box of Muumi biscuits to give to my students in the first class as an icebreaker and to introduce something “Finnish” to them. But first 4 levels needed to be climbed for which I took the world’s slowest yet funkiest elevator. To compensate for the pace of the journey, there’re couches to rest on and many photos with familiar faces from Aalto to look at. I learned that every now and then the elevator stops and traps people in but it was a relief that there were people I could call in case I were in such trouble. 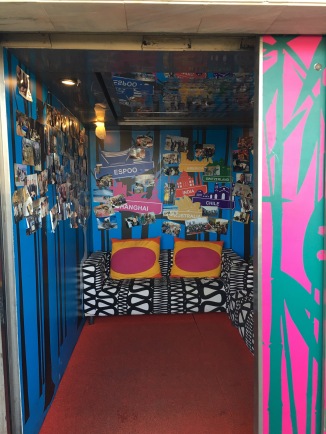 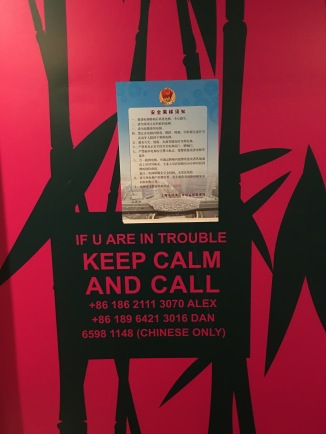 When I finally arrived at the fourth floor, I realised that there is already a lot of Finnish presence in the centre -Muumi and sauna meeting rooms, Finnish-Chinese hugging point, Marimekko design couches, etc- and so my Muumi biscuits would break the ice but wouldn’t be a cultural exposure hit after all. I had 17 students in my class, all female, and five of them were exchange students from Italy, Sweden and Germany. The background of students covered industrial design, environmental design and architecture. 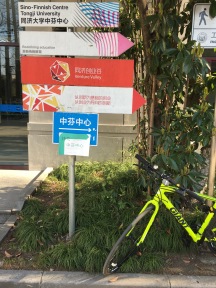 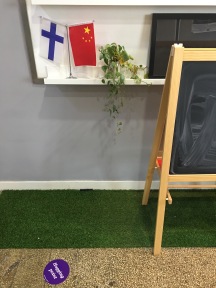 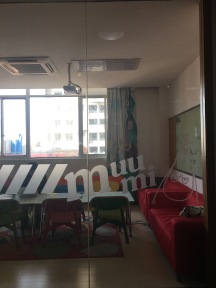 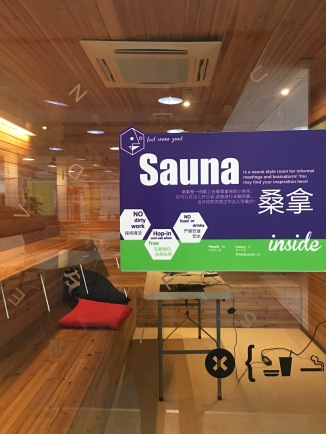 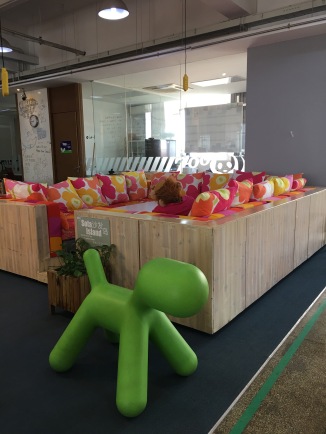 I designed my teaching to consist of two parallel running tracks: one on theories of sustainability transitions and the other a group project through which the students would get a chance to implement the theories as they learned about them on a step-by-step basis by doing the front-end work for a mini-scale transition experiment. We had classes everyday except for Mondays for two weeks and the final presentations of the group project was on March 17th.

The students engaged enthusiastically with the lecture content and the project from the beginning and worked incredibly hard within the short time period allocated for the course. The first day was probably the most challenging for the students as they were introduced to several new concepts and models including systems thinking, multi-level model of system innovations and multi-phase model of transitions. The second day compensated for this by being a day allocated to initial project framing, site selection and data collection. Together we discussed what is feasible within the limited time and went over the data collected to develop actionable insights. Then the rest of the first week went by alternating days of lectures and project activities. The second week started with a lecture on strategic niche management and a guest lecture on open design which the students enjoyed immensely. In the rest of the week I introduced students to backcasting from a desired vision. The students developed timelines to show how their vision can be achieved in fifteen years time and who should be involved based on the stakeholder analysis they undertook in the first week. Then they ideated for an initial ‘acupuncture’, a small, scalable project that can start today to trigger the transition. On the last day before the presentations the students spent all day in the studio and I made myself available to them for feedback and final critiques.

On Friday morning I was rather excited. One, because the day before the Dean Lou Yongqi had invited me for a short m 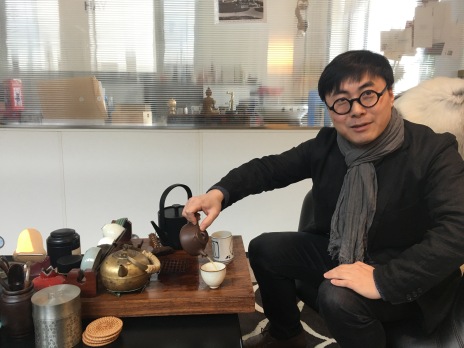 eeting in the morning. Two, because my students were going to present in the afternoon and the course would come to an end. My meeting with the Dean was short and sweet; he had a mini tea ceremony set in his office from which he poured tea in tiny cups. Not knowing how to appropriately receive the serving I felt a bit clumsy, but Dean Lou made feel comfortable by creating a light conversational atmosphere. We talked about the Väre building in Aalto campus which is going to be the home of School of Art, Design and Architecture once it is completed in 2018.We exchanged few jokes as well as good wishes. Following my meeting with the Dean, I went to the studio to find all of the groups working hard to finish their presentations.

The presentations started at 2 pm. Apart from me as the main assessor, there were three colleagues from Tongji to provide comments and give marks for moderation purposes. Following the presentations we left the class to discuss and reflect while students completed feedback forms. We all shared the opinion that the students did a good job within the given the timeframe although their work could be pushed further with certain arrangements we may try in the next round. Following this discussion and after students finished filling in the feedback forms I went back to the class to celebrate completion of the course and to farewell. Then I rushed back to my hotel room to read the feedback forms as I was very curious what the students thought of the course. 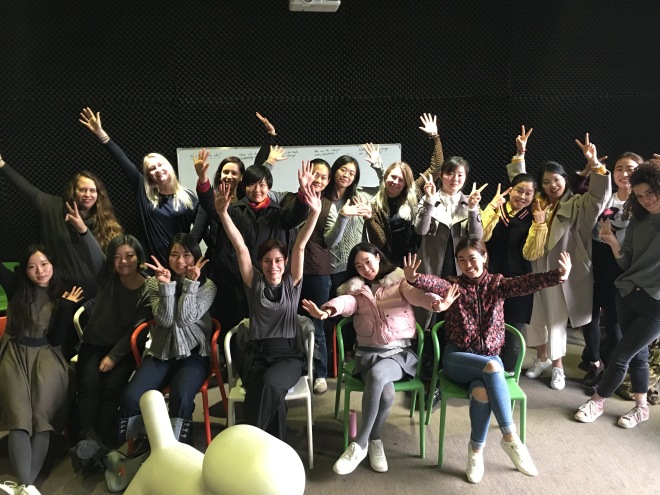 In general the overall feedback was very positive. The students thought the course added to their knowledge and skill set and listed several specific things they learned and thought to be valuable learnings. Two main improvement suggestions stood out as being mentioned by the majority of students: 1. The short duration of the course made it difficult for them to reflect on and digest all of the learnings and the pace was trying, 2. Some of them struggled with English and stated that it’d be good to have a Chinese course assistant. I have a list of things I thought could improve in how I designed the course and I will incorporate these in the second running of the course. I have also noted down several improvements needed about the practical arrangements and logistics which I’ll share with Aalto and TongJi colleagues to together work on.

I arrived back to Helsinki yesterday, on 18th, in a state of happy exhaustion. The past two weeks have been intense and tiring but yielded to many learnings and rewards. Collaborating across oceans and cultures is not the easiest of undertakings, nevertheless, it opens new doors, creates new perspectives and inspires new projects. I feel very lucky having had a chance to run a course in China on a topic that has been my primary research focus since I started my PhD in 2006. What a privilege to look at my work from others’ cultural paradigm as it’s reflected in their practice. Also, what a great chance and learning opportunity to put to test my teaching style and pedagogical assumptions. And on top of this, having the opportunity to shortly glimpse at a dazzling city I never had been before.

I am a lecturer/researcher in the area of design and innovation for sustainability. My research is about system innovations and transitions for sustainability and aligning micro, meso and macro-level changes towards the necessary societal transformation. I am particularly interested in developing theories and tools/methods to help organisations to actively participate in upcoming systemic changes through developing social, organisational and technological innovations using design thinking, systems thinking, sustainability science and futures inquiry methods. I work as Assistant Professor of Sustainable Design at Aalto University. View all posts by Dr. Idil Gaziulusoy